More about the Darwin Autonomous Shuttle

What is the Darwin Autonomous Shuttle (DAS)?

The Darwin Autonomous Shuttle, or DAS, is a minibus-sized, purpose-built autonomous vehicle, powered by electricity. It can carry up to fifteen passengers.

The DAS was manufactured by Navya, an experienced French developer of autonomous vehicles. Similar Navya autonomous shuttles have already been trialled at sites across the world. Navya’s page ‘Experimentations with Navya Autonomous Shuttles’ gives a quick overview of some of these trials in France, Japan, the US, the UAE and the UK.

What is the trial and where is it taking place?

The trial launched on 29 November 2021 at Harwell Science and Innovation Campus.

In the trial, the DAS provides a regular passenger transport service to campus residents. The DAS drives autonomously and stops at campus bus stops along the way, allowing passengers off and on.

To board the shuttle, you will need to show your Harwell Science and Innovation Campus pass or guest pass to the safety operator. There is no cost to ride the shuttle.

The DAS travels two routes on the campus: one along Fermi Avenue and one along Eighth Street. These routes are outlined below, in orange and blue respectively: 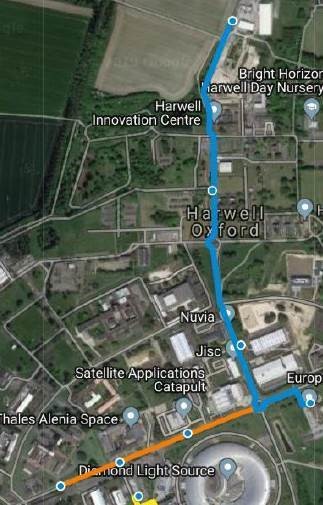 Satellite image ©2019 Google
The point at the bottom right where the two routes converge is ECSAT, the European Space Agency building on Fermi Avenue.

The trial is initially planned to last for nine months, after which we hope to extend it.

What is the purpose of the trial?

The trial has several goals:

What is the role of the safety operator?

Although the DAS does not have traditional driving controls, such as a steering wheel, it does have safety controls that can be used to operate the vehicle in an emergency.

Whenever the DAS is in operation, one of our two safety operators will be on board to greet passengers and use the safety controls if required.

Both safety operators are experienced licensed bus drivers and have undergone specific training to use the DAS.

What other safety measures are in place?

The DAS’s manufacturer, Navya, has fully mapped out the routes the shuttle is travelling. The shuttle has been programmed with this mapping information, to ensure it knows what to expect and what to look for.

Darwin has also commissioned an independent route safety assessment. This was carried out by an experienced independent company, which concluded that the two routes for the trial were safe.

The shuttle is equipped with LiDAR sensors, cameras, odometry sensors and a GNSS (GPS) antenna to help it position itself and detect obstacles.

A specially trained maintenance team is on standby, ready to deal with any mechanical issues.

Is the DAS registered and insured?

The DAS has been registered with the DVLA for use on public roads. The licence plate number is FX21 HWO.

The shuttle is insured by Aviva.

Who is supporting the trial?

The trial is being run by Darwin Innovation Group, and the shuttle’s safety operators are employed by Darwin.

As mentioned, the DAS was made by Navya and is insured by Aviva.

We are grateful for the support and advice we have received from the CCAV throughout our preparations for this trial.

What personal data is being collected in this trial, and how will it be processed?

For more information about the Darwin Autonomous Shuttle and CAV regulation, follow these links.