AstroPlant: learning how to grow plants in space

Space is vast and beautiful, but it’s also largely barren. If we want to send astronauts into space for long periods, we’re faced with a lot of questions. How do we keep people fed in space, given that it costs thousands of pounds to send even a kilogram of supplies into low Earth orbit? How do we supply them with enough vitamin C to prevent scurvy? How do we look after their psychological health?

A lot of problems could be solved if we could grow plants in space. Plants can convert carbon dioxide into oxygen. They’re a source of nutrients, especially vitamin C, and can be stored for long periods in the form of seeds. Many of them can be eaten raw, which is convenient in an environment where cooking may not be straightforward. They could even be used for fuel.

Plants are also pleasant to be around, which is valuable in itself. In lockdown, a lot of us have discovered the value of looking after houseplants, seeing trees outside our windows or going on strolls through nature. Being around plants feels refreshing, which is important when you’re in a confined, static environment.

Growing plants in space isn’t easy. They can’t naturally access the light and nutrients they need, and the lack of gravity causes its own problems. We’re going to take a look at what’s been achieved so far, and at the research that will make space plants easier to grow in the future.

Has anyone managed to grow plants in space?

The history of plants in space is only a couple of decades shorter than the history of humans in space. As recorded by Guinness World Records, the first species of plant to flower in space was Arabidopsis, a type of rockcress, grown aboard the Soviet space station Salyut 7 in 1982.

Since 2014, NASA has managed to grow assorted plants in the Vegetable Production System (Veggie), a miniature garden on the International Space Station (ISS). The growth experiments have included lettuce, mustard, algae, zinnias and kale. You can read about NASA’s efforts here.

You can’t just plant a seed in soil and trust it to stay in place without Earth’s gravity. The Veggie seeds are glued with a natural gum onto ‘plant pillows’: small bags, secured in place, which contain soil, controlled-release fertiliser and water that’s injected through a valve. After all, without gravity to draw it downwards, you can’t just pour water in space.

When the seeds are glued in place, they’re carefully positioned to encourage the roots to grow ‘down’ into the pillow, as the seeds can struggle to grow in the right direction without the guidance of gravity. A bank of LEDs above the plants gives off light designed to help the plants flourish, and this also aids in guiding the plants ‘upwards’.

These experiments allow NASA to study how plants grow without Earth’s gravity, which is obviously important for future space plant efforts. They’re also making a difference right now; the astronauts aboard the station have the pleasure of looking after the plants and, when they’ve grown an edible crop, of eating the results.

The ISS also houses the Advanced Plant Habitat, an automated growth chamber with cameras and sensors. The sensors constantly feed back to an Earth-based team who can control the system themselves, meaning the crew on the space station don’t have much involvement. In other words, remote connectivity has made it possible for people on Earth to grow plants in space.

Other organisations have also experimented with plant growth on the ISS. The European Space Agency (ESA) has an interesting article on an experiment conducted in the Columbus ISS laboratory, studying the effects of weightlessness on thale cress seedlings.

What is the AstroPlant project? 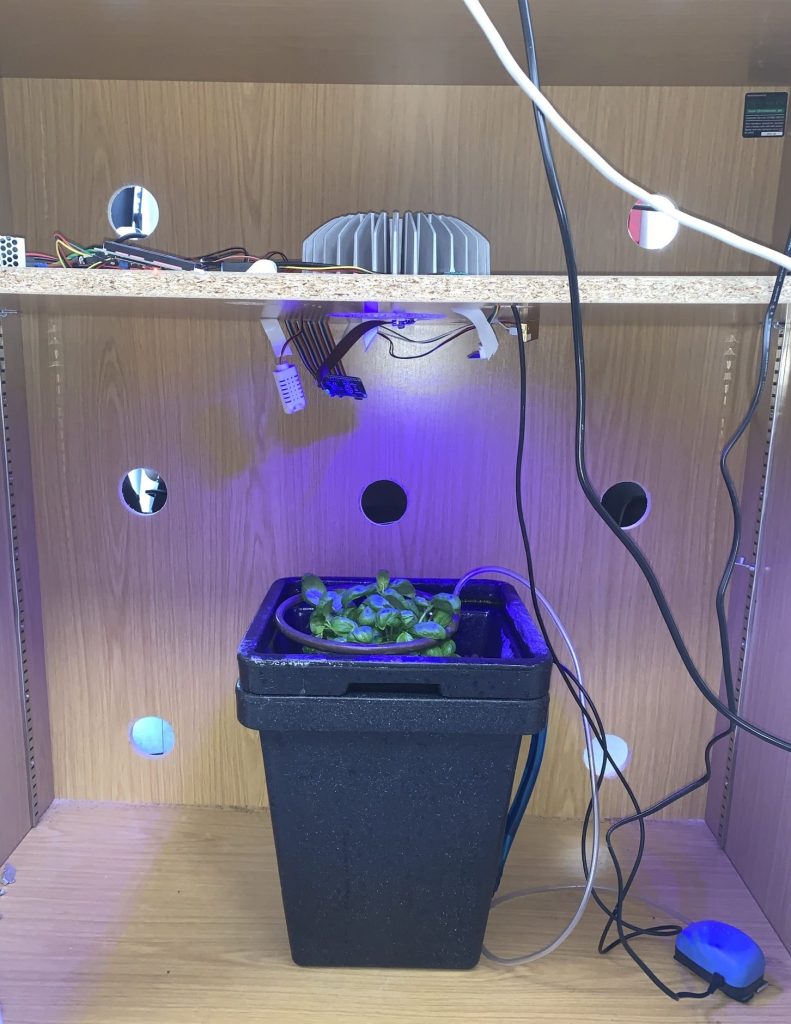 Even though there have been successful efforts to grow plants in space, there’s a lot of room for improvement. To get better at growing plants in space, we need more data. That’s where the AstroPlant project comes in.

At the moment, as a species, we don’t have the resources to perform a lot of space-based plant-growing experiments. NASA’s Veggie experiments are incredible, but the Veggie gardens on the ISS are very small, and there are only two of them. Between 2014 and 2019, the Veggie units produced just over 20 crops. That’s still an impressive number of crops to grow in space, but it means that the Veggie experiments can only give us information slowly.

The AstroPlant project, in association with ESA, allows anyone to grow plants in systems similar to the ones used in space and submit their findings through an app. You can grow the plant at home, but, like the ground-based NASA team operating the Advanced Plant Habitat, you can remotely connect with the system’s CO2 sensor, lights, camera and fans. With the help of the public, ESA can gather data through this project and get an idea of what plants might be good candidates to grow in space.

Although he doesn’t work directly with growing plants in space, Carlos Carbajal has experience of developing systems that allow plants to grow in confined indoor spaces, without natural sources of light, water and nutrients. Each plant needs different conditions, he explains, and the AstroPlant project can help find the perfect conditions for different plants much more quickly than would be possible otherwise.

For example, you might want to test the effects of different combinations of water, light, nutrients and carbon dioxide on wheat. ‘Each test will require at least a couple of weeks to see the results, and thus it could take years to study just one plant,’ Carlos says. ‘AstroPlant is trying to spread this load and collect data from many participants around the world.’ With this collected information, the project can draw conclusions about the best conditions for each plant.

‘We are far from understanding space-like conditions, including no gravity, no sunlight, high radiation, isolation, and many other yet unknown factors,’ Carlos warns. ‘However, the insights produced by AstroPlants will help astrobiologists to develop more accurate predictions of what could happen to the plants in space, and what experiments they should carry out in the future.’

Here at Darwin, we’re getting involved in the AstroPlant project ourselves. You can follow the experiment on our AstroPlant page.