What are the levels of driving automation?

What makes a vehicle autonomous? It’s not a straightforward question. If a car can drive itself in most situations, but a person needs to stay at the steering wheel in case there’s an emergency, is that an autonomous car?

To tackle this problem, SAE International, a global developer of engineering standards, created the ‘levels of driving automation’. This is a six-point scale to classify the autonomy level of vehicles, running from 0 to 5. We’re going to take an in-depth look at the six levels of vehicle autonomy, and at where we are now.

The lowest level of vehicle autonomy is level 0. You might expect a level-0 vehicle to have no autonomous features at all, but in fact it may have minor features to support or warn the driver. For example, automatic emergency braking when the vehicle detects that it’s about to collide with something, or proximity sensors that warn the driver of obstacles when parking

The human driver is driving at all times. The vehicle may be able to offer warnings, or to take quick action in emergency situations, but it can’t perform the day-to-day driving procedures of acceleration, steering and ordinary braking by itself. Without the driver, the vehicle wouldn’t be able to move at all.

At level 1, a vehicle has features that assist the driver with either steering or speed control, i.e. acceleration and braking.

For example, a car might have adaptive cruise control. This allows it to detect any vehicles in front of it on the road, and to change its speed if necessary to stay at a safe distance. This would be a level 1 car, unless it has other autonomous features that move it up to level 2.

Again, the autonomous features can assist, but a human is driving the vehicle at all times. Adaptive cruise control can make long drives easier, but it can’t drive a car on its own.

At level 2, a vehicle can assist the driver with both steering and speed control. For example, take the hypothetical level 1 vehicle that has adaptive cruise control. If you add an autosteer feature that keeps the car centred in the lane, it’s now a level 2 vehicle.

The vehicle still can’t be said to be capable of driving itself at level 2, although it may be able to travel some distance without intervention. There are situations the vehicle won’t be able to respond to appropriately, such as approaching a traffic light. It’s the human driver’s responsibility to supervise the vehicle’s automated features at all times. As the driver, you need to keep your hands on the steering wheel, stay aware of your surroundings and be prepared to take action at any moment.

The dividing line between driver support and automated driving

The SAE levels of autonomy can be divided into two sets of three: 0 to 2, and 3 to 5. At the levels we’ve looked at so far, the automated features of the vehicle are driver support features.

Up to and including level 2, you, the human driver, are responsible for the vehicle at all times. You need to stay alert and aware constantly, with your hands on the steering wheel and your eyes on the road. The vehicle can assist you, but it can’t drive itself; that’s your job.

From level 3 upwards, you’re not the one driving. You’re there to assist the automated systems, rather than the other way around.

At the lower levels, a human is driving or at least supervising at all times. In some scenarios, though, a level 3 vehicle can handle itself. In addition to steering, braking and accelerating, it can monitor its environment and react to particular situations. For example, it can recognise that a nearby car is moving more slowly, make the decision to pass it and perform the passing manoeuvre itself.

This is the first level at which, as the human in the car, you can take your eyes off the road. However, a level 3 vehicle can only drive itself in specific, limited situations. Outside those situations, the vehicle will ask you to take over, so you’ll need to be available to drive at all times.

At vehicle autonomy level 4, the vehicle can drive itself without any human input beyond being given a destination. It can find its own way while steering, accelerating, braking and responding to other traffic as necessary. It won’t be able to do this everywhere – it’ll probably be helpless if you drop it in the middle of a field, for example – but it should be able to drive itself in areas that are thoroughly mapped and monitored, once it’s received all the information it needs to handle the area.

At all the previous levels, you needed a qualified human driver in the vehicle, either to do the actual driving or to take over when necessary. At level 4, you can climb into the vehicle and let it transport you even if you don’t have a driving licence yourself. In fact, you don’t necessarily need a person in the car at all.

When a human driver isn’t needed, entirely new possibilities open up. A level 4 vehicle might serve as a driverless taxi, for example, trained to carry people around a particular area. It can travel from the destination to the next customer without human involvement, and the people it picks up don’t need to be capable of driving.

We’ve now moved fully into the theoretical. At level 5, a vehicle is perfectly autonomous. It doesn’t need a human driver; it doesn’t need to be familiar with an area; it can find its own way through any terrain, in any conditions. A level 5 vehicle should be able to handle any situation that a human driver could.

At first glance, levels 4 and 5 can look very similar. In both cases, the vehicle can travel entirely by itself; the difference is that a level 4 vehicle can only do this in limited conditions.

In fact, there’s a large gulf between level 4 and level 5. At level 4, the autonomous systems have all the information that they need to operate in a particular area. At level 5, the vehicle needs to be able to work out how to respond to a situation by itself, without guidance. This makes level 5 vehicle autonomy a more distant goal, but it’s one that we’re working towards.

Where we are now 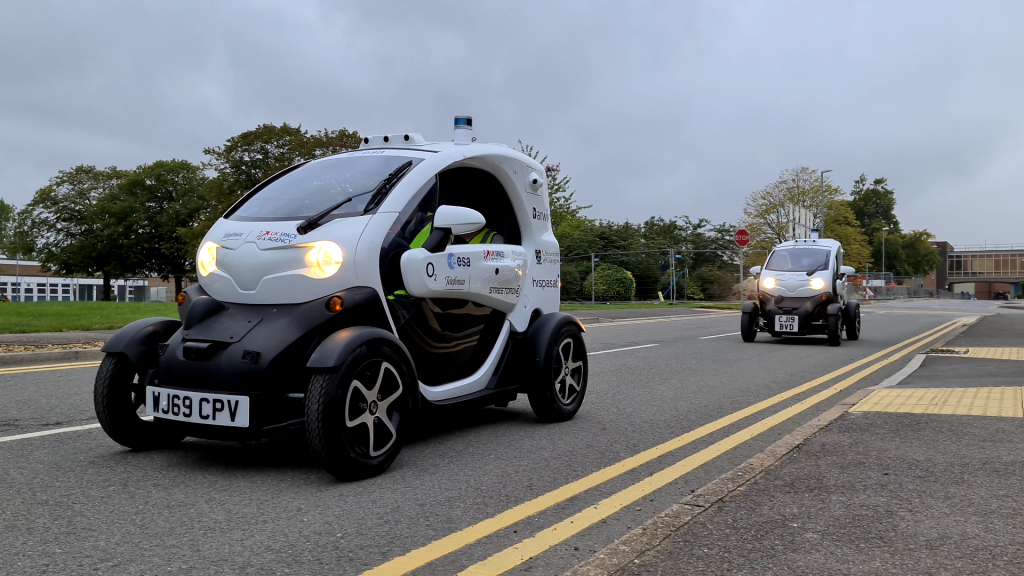 There are exciting developments taking place in the field of vehicle autonomy, some of them being researched at our own SatCom Lab. Level 3 technology exists already, and level 4 technology is being developed.

However, autonomous vehicles can only be driven on public roads if the law allows, and the technology must be tested thoroughly and shown to be safe before regulations can be changed. Because of this, you won’t usually see anything over level 2 on today’s UK roads.

Level 2 might not seem that impressive, particularly as a vehicle’s only technically considered capable of automated driving at level 3. However, when you consider it, even level 2 is a remarkable achievement. It’s the first point at which a vehicle can travel any distance without the involvement of the human driver beyond monitoring the situation.

At level 1, you’re always responsible for at least one crucial, constant aspect of driving: speed control or steering. At level 2, you may only be able to activate the automated features in particular situations – travelling down a long road, for example – but, while they’re active, you can just sit with your hands on the wheel and stay alert while your vehicle carries you along.

We have an exciting future ahead of us, but it’s worth taking a moment to admire how far we’ve come already. Now, thanks to the work of countless people, true automated driving is just around the corner, and we’re playing our part to get us there.

Darwin Innovation Group is an Oxfordshire-based company that provides services related to autonomous vehicles and communications. If you’re interested in working with us, take a look at our careers page. If you’d like to know how we can help your organisation make use of autonomous vehicles, contact us. You can also follow us on LinkedIn or Twitter.