MWC Barcelona, one of the biggest annual events in the telecommunications industry, ran from 28 February to 3 March this year. Rodrigo Barreto, our lead architect, shares his experience at the event in this post.

The Mobile World Congress is traditionally the largest international event in telecommunications. It is where behemoth companies make impactful announcements on the launching of new technologies, on the signing of mega customer contracts and on the formation of strategic partnerships. It is a once-in-a-year opportunity to meet the majority of relevant players (notably, Apple is the exception) under a single roof (actually, seven different halls in a single complex – more on that later), and also a chance to witness up-and-comers from all over the world exhibiting their offerings as part of the many national pavilions that are present at the event. Expectations of MWC2022 were at a boiling point in more than one way, as this was the first major edition post-pandemic and after a number of major shifts in international relationships.

Darwin had a prominent presence at MWC this year. Our satcom partners, Hispasat, were eager to display our cooperation as a success case of integration between terrestrial and satellite communications, and our presence at their stand provided very relevant visibility. 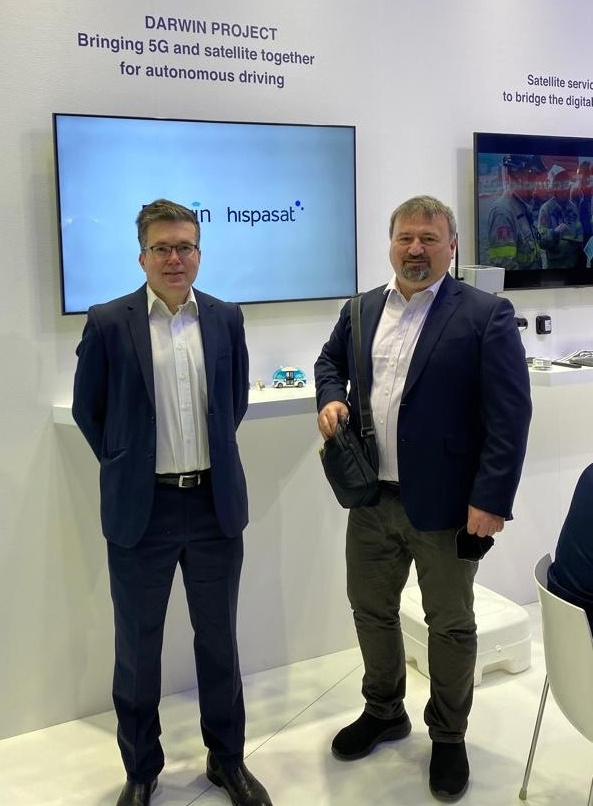 Coming to the conference, Milos (our CEO/CTO) and I were keen on synchronising thoughts on our game plan. We agreed we would apportion time between the Hispasat stand and walking the floor, and we defined target objectives in areas such as collecting competitive intelligence, identifying potential partners in strategic areas and solidifying existing partner relationships. We knew that drawing a precise plan is always an elusive task, and so we also allowed ourselves flexibility and opportunities for discovery and exploring; you never know who you will meet or which opportunities will present themselves at events like this.

Arriving at the Fira Barcelona, we quickly realised that, thankfully, the crowds were back. However, contrary to what I have witnessed in previous editions of the MWC, gaining access to the show was straightforward and extremely fast thanks to the face recognition system that the organisers had put in place; all required data had been collected as part of the registration process.

Once we were inside the venue, it was time to make our way to the Hispasat stand. It sounds like a simple enough task, but it took us a good hour and a half to accomplish it. First stop, bumping accidentally into a long-time acquaintance in front of the Nokia stand. A few minutes more, and another friendly encounter at the Mavenir stand. Then off to Hall 7, but not without first trying to mentally map the location of the stands of key companies along the way in each of the intermediary halls.

The Fira is divided into seven huge halls, which are all interconnected. In normal circumstances, reaching Hall 7 from the entrance would take 10 to 15 minutes in a brisk walk using the covered footbridge. However, if you walk the show floor in a zigzag fashion from hall to hall, as we did arriving for the first time into the show, the time required can easily expand to 45 minutes.

The topics of discussion at MWC 2022

The technologies, products and services showcased during the Mobile World Congress are always very extensive, but a more limited number end up being part of a common industry narrative. This year the topics that were high on the agenda included the Metaverse, green solutions for otherwise power-hungry telco infrastructure, the disaggregation and opening up of radio access networks (Open RAN), and the wide use of AI to automate telco operations (Zero Everything).

On the opposite side of the spectrum, topics that were super-hot in the narrative from previous years ended up a bit diluted. We expected to see more on 5G use cases and particularly on support of automotive mobility (C-V2X); this was prominent at the Qualcomm stand, with technology maturity at the level of proofs of concept, but we didn’t see it at many other stands. Another observation is that the industry as a whole is still largely focused on making 5G a mainstream technology; the focus is not yet on 6G.

The topic closest to our hearts, convergence between terrestrial and non-terrestrial networks, was mostly visible at Hispasat and Intelsat’s stands – not surprisingly, satellite operators.

It is almost impossible to dissociate the experience of attending the Mobile World Congress from the warmth of its host city. Beautiful Barcelona is so well prepared to accommodate the large influx of visitors and offers so much in terms of cultural, gastronomic and general leisure/sightseeing opportunities. Visitors can easily recover from the burden of a busy day of commitments by, for instance, going for dinner at one of the many tapas bars in the old city.

We certainly took full advantage of these opportunities, including cementing partnerships by enjoying a good meal in a relaxed environment – for example, in the picture below, socialising with our friends at Cognizant. 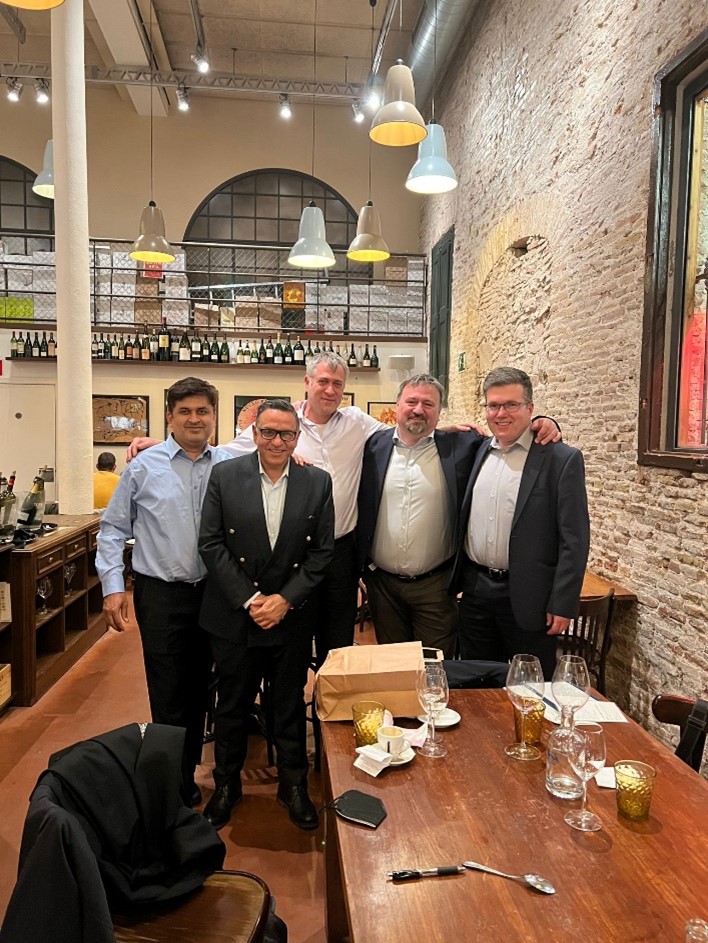 Back from the show, it is time to follow up on the contacts and conversations initiated in Barcelona and, regrettably, also time to embark on a diet. See you next year, MWC Barcelona! 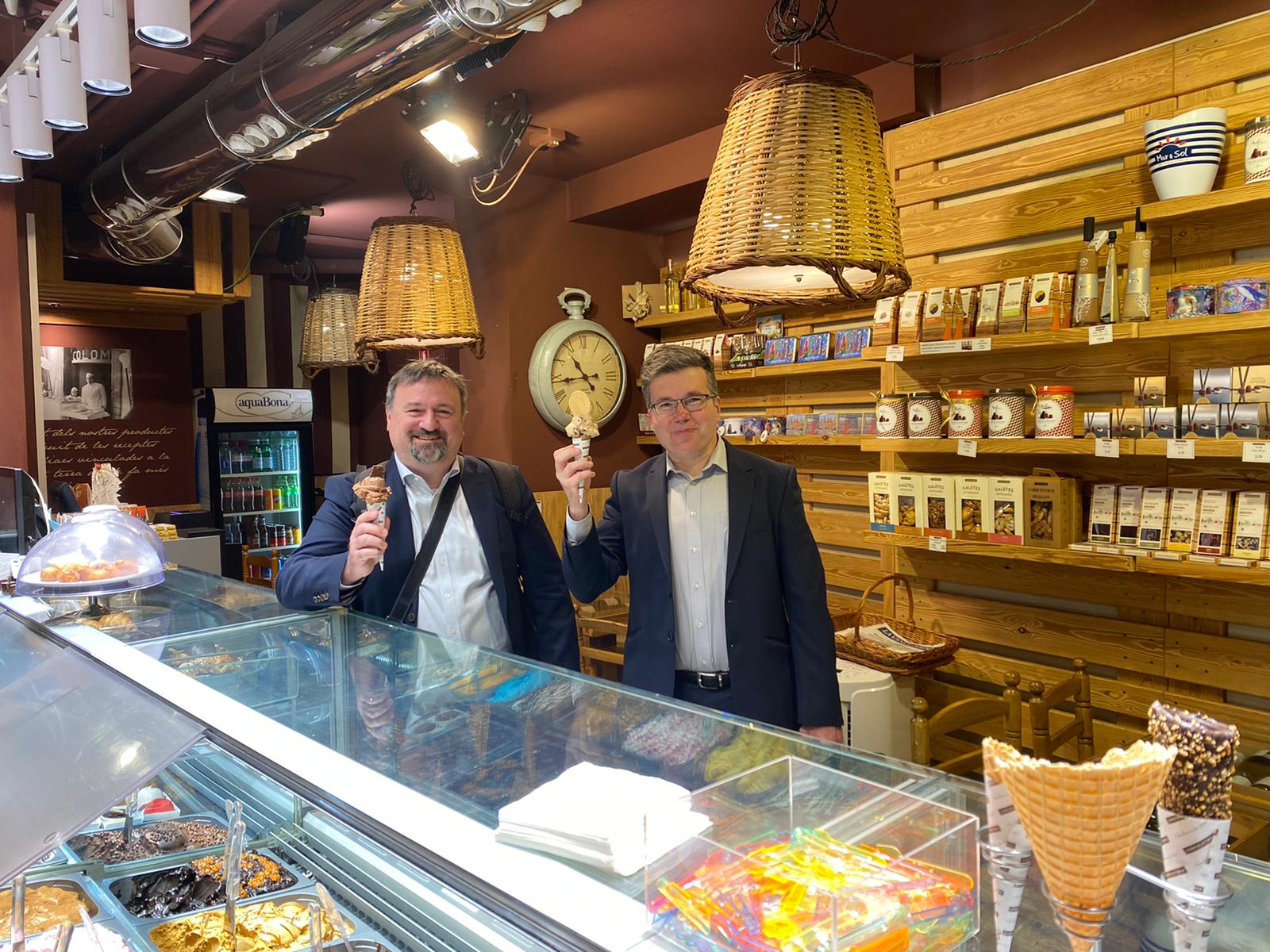